Walatowa, Jemez Pueblo, is a Sovereign Independent Indigenous Nation, and one of the nineteen Pueblos of New Mexico.

The Jemez have lived in the Jemez Valley for hundreds of years and in Northern New Mexico for at least a thousand years. The Jemez People are primarily farmers, but we also gather and hunt. We speak a language that only a few thousand people speak. Linguists call it Towa, but I prefer to call it Jemez, for our People. There were over 40 villages with over 500 rooms, some with even more, and thousands of small one to two room field houses, when the first Spaniards explored this area in the 1540s. They documented 7 to 11 Jemez villages in their reports. (Jemez is the Spanish spelling for the word "Hį:mįsh" (HEE-MEESH) and is the plural form of what we call ourselves).

The Spanish came in the late 16th century to begin their "colonizing" and "christianizing". They forcefully tried to convert the Jemez (and other Pueblo People) to Christianity, and this is when the Spanish forced the Jemez to build a church in 1621. The Spanish named it, San Jose de los Jemez (now part of the Jemez Historic Site) and was one of two churches built in the Jemez area at the time. The other mission, San Diego de la Congregacion, was built about a year later at the present site of Jemez Pueblo. ("Pueblo" is the Spanish word for village or town. The Spaniards called us "pueblo people", because we lived in apartment-like structures that contained many rooms which they referred to as "pueblos".) The San Jose de los Jemez Mission Church was most likely abandoned in the 1640s, but the village of Gisewa was still inhabited. The Spaniards' "Christianization Efforts" were then concentrated at Jemez Pueblo. The Jemez rebelled for many years against the Conquistadors and missionaries. Most Pueblo People accepted the foreign religion and adopted new ideas and technologies to a certain point. Once the Spaniards started hanging and publicly humiliating Pueblo Religious leaders for participating in what they called "devil worship", Pueblo People had had enough.

All Pueblo People united and revolted against Spanish Domination (on August 10th and 11th of 1680) to preserve their way of life and forced the Spaniards out of New Mexico. This revolt resulted in years of cultural revival. The Jemez and all Pueblo People were able to maintain many aspects of their Cultural Heritage and Their Languages.

When the Spaniards came back to this area, 12 years later, a battle to reclaim dominion over the Jemez People took place on top of Mąqyashį:(Thumb Mesa), a high mesa North of Jemez Pueblo. Spanish forces, with the aid of subdued Pueblo People from Santa Ana and Zia, led by Don Diego de Vargas, killed 86 people, a few were burned alive in their homes, a few jumped off the high cliffs, and the Spaniards took 361 prisoner. So went the so-called "Bloodless Reconquest", which is what this period in time was referred to.

We have tolerated and incorporated parts of the Catholic faith, and other Spanish-introduced modifications of life. A good example of the incorporation of Spanish beliefs comes with our Annual Feast Day Celebrations of Catholic Saints where we celebrate the Harvest and the saints, with a mix of Jemez and Keres (Another group of Modern Pueblo People) traditions. This kind of blending of cultures adds to the loss of our own cherished Jemez Beliefs. Those who prefer the Catholic way, lose interest and belief in our native religions. Catholic beliefs and Pueblo beliefs in general, have many aspects in common, but they also have many differences and contradictions. On top of this, there is also the influence of the dominant "American Culture" which has overwhelmed our everyday lives. Despite all this, we have persevered through the years and have maintained our cultural identity, by living with the old ways in the modern age.

More History at the Pueblo Of Jemez Welcome Center 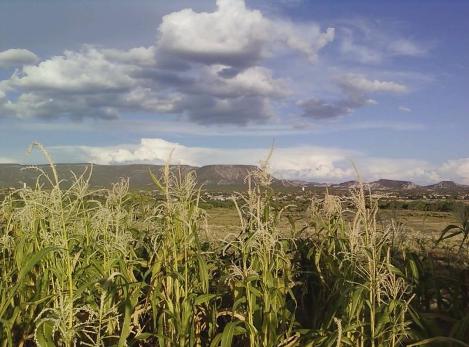 We (The Jemez People) speak a very unique language. Linguists have used the term "Towa" for the name of our language, but I prefer not to use it, because languages should be named for the people who speak the language. So, I will refer to it as, Jemez. Linguists have used "Towa" to differentiate between Tewa and Tiwa-- two other languages spoken in other Pueblos in the Northern New Mexico-- since we are very distant relatives. Jemez, Tewa and Tiwa are different languages that belong to the Kiowa-Tanoan Language Family.

Our language is as much a part of our religion as we are a part of this earth. They can't be seperated. Our language should be preserved in a way that will allow it to continue forever in to the future without being exploited. A written form will allow our language to be preserved before rarely-used phrases are forgotten, and before slang is the norm. We would also be able to create new words that are not part of our traditional language so we do not use English words as we speak Jemez. There will be many disadvantages and advantages to a written form of Jemez but I believe it should be done.

Secrecy is part of our spiritual way of life and any details regarding our religion is rarely given to outsiders (non-Jemez). 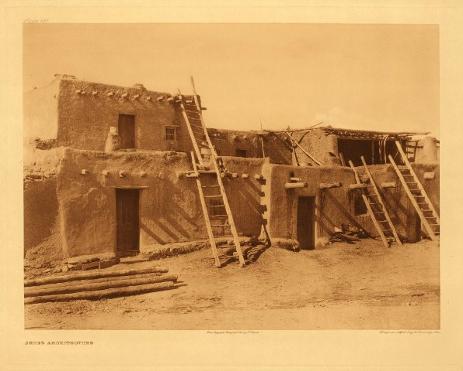 Jemez Images from the Palace of the Governors Photo Archives