I currently make several types of flutes. They are unique and playable musical instruments with their own distinct look and voice.

How I make my flutes

I use simple hand tools to make my flutes- knives, gouge chisels and hand planes. I also use some modern tools like belt sanders, routers, and rotary tools. I generally make these flutes with two pieces of wood from a split branch or store-bought pre-milled 2x1s. I remove center parts of each half with a gouge chisel or router, so that when glue the two halves together, they will form a tube. Some tubes I will drill out with a long drill bit so that there are no glue lines on the side of the flute. I hand-shape and sand each flute and sealed with various types of finishes, e.g. teak oil, danish oil, lacquer, polyurethane or spar urethane. I may also bind them in certain places to prevent splitting and also for decorative purposes (Waxed Nylon or Bead Cord).

My flutes are for sale here and on eBay in accordance to the Indian Arts and Crafts Act of 1990, because I am an enrolled tribal member of a Federally recognized tribe- Jemez Pueblo. I give flute performances, lectures and demonstrations about my flutes, and what I know about their history.

Eagle bones are ILLEGAL to sell, trade or barter. Although, I may work on any Eagle bone that was LEGALLY obtained, just contact me for more information.

My collection of bone flutes and their cases. 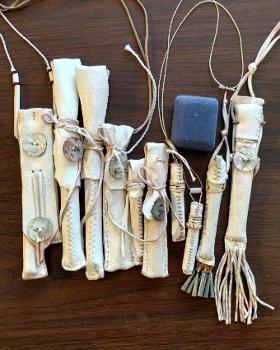 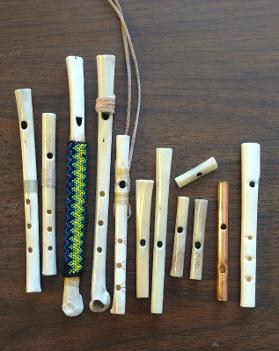 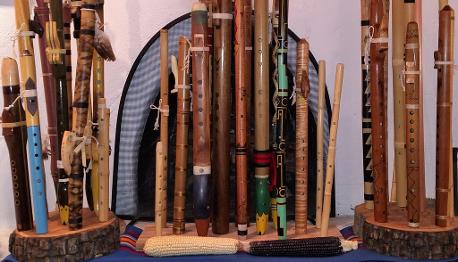 My View of The Term, "Native American Flute"

Pueblo Peoples of the Southwest have been using flutes ceremonially for hundreds of years, to conjure up rain spirits, clouds, and anything related to good crop growth. Most of these flutes were rim-blown, and some were bone flutes or whistles with a few holes. These flutes have been recently called "Anasazi" flutes, but I call them Pueblo-style rim-blown Flutes, or Pueblo Flutes. Not much is known by the public about how Pueblo Flutes were/are played by Pueblo Peoples due to the secretive nature of our lifestyle and beliefs; however, they are still used in modern Pueblos.

My first example is a Zuni Pueblo Dance Flute (Image source: Objects of Myth and Memory: American Indian Art at the Brooklyn Museum). The decorations of this flute are quite simple yet beautiful: a decorated gourd attachment on one end with eagle plumes tied on the rim, and evergreen branches bound in the center where the dancer would have held this flute while dancing.

The second is a five-holed Hopi Flute from the Boston Museum of Fine Art.

The third is a four-holed flute from San Felipe Pueblo "collected" by a man named Spinden, in the early 1900s.

The forth is a four-hole flute from Cochiti Pueblo with fragments of a gourd attachment (American Museum of Natural History).

The fifth flute is a four-holed flute "collected " by Stuart Culin in 1907 whilst visiting Jemez Pueblo (Image source: Objects of Myth and Memory: American Indian Art at the Brooklyn Museum). It appears to be made out of a type of reed. It would have also had a gourd attachment on the bottom like the Zuni and Cochiti flutes. The gourd attachment represents a rain cloud with the eagle plumes representing rain. These Jemez and Zuni Flutes are now stored in the Brooklyn Museum of Fine Art.

There are also some historic Pueblo Flutes that are put up for auction, like this Kewa Pueblo Flute. It was on auction at COWAN'S, a consignment auctioneer. Pueblo People have historically used bone flutes as well. The image below is from an excavation of an old Jemez Village located in the Jemez Mountains, called "Unshagi", place of the Juniper trees. Other similar flutes have been found at other sites throughout the Southwest. 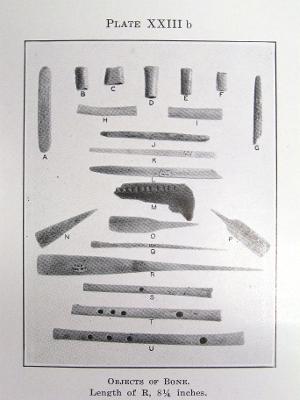 Bone artifacts from excavated Jemez ruin of "Unshagi". Image from The Jemez Pueblo of Unshagi, New Mexico, with Notes on the Earlier Excavations at "Amoxiumqua" and Giusewa by Paul Reiter, University of New Mexico Press, 1938.