My Uncle, Jimmy Shendo, was a great musician. He not only knew how to sing, he also knew how to play the Native American Style Flute, and the guitar. He told great stories about his life through his songs, and he made our lives a little bit better every time his music was played.He was a very kind and gentle man. He never held a grudge. He was always warm and welcome whenever we visited.

My daughter Amy, was real fond of him and yelled out his name every time we passed him on the road or by his house. "Uncle Jimmy!", she would yell out before she ran over to give him a hug. I wish she could have known him a lot longer, because I know he still had much more to teach her and the rest of us.

He taught me that Jemez people are strong. He gave us a proud voice no one else could have given us. Uncle Jimmy gave me the strength and inspiration to perform. I was lucky enough to gift him a flute I had made from Douglas Fir that I brought home from the Jemez Mountains to the North. He had this flute and his other flutes with him on that early winter morning, December 7, 2009 (News Report), when the spirits called for him to come home.

All his flutes survived except one, one of his favorites made for him by Paul Thompson. I had so many things I wanted to share with him: new flutes, new flute music, new website. I'm sure he will take a look at everything when he gets the chance.
Uncle Jimmy was always proud of his family and I am very proud of him. All we have of Uncle Jimmy, are the life lessons of the Original Fry Bread Lover, the music of the Original Town Crier, and the memories of the Original Woodchopper's Son. You will live forever in the hearts of Jemez People and with everyone who knew you. 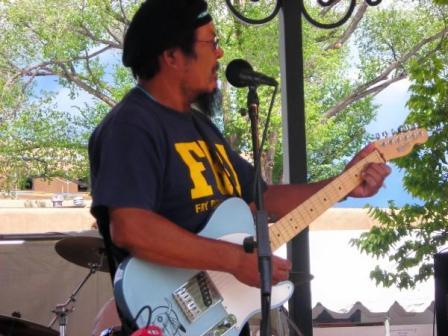 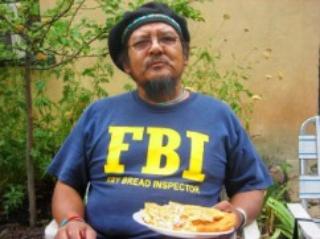